Francesca, an Italian grayhound, turns two in September. “She’s a beauty, she stops traffic—really,” says Frank Smith, an LA-based movie exec who owns her with his husband Marco Leone, and is perhaps a little biased. “But the breed is kinda high strung and hyperactive, so we knew training would be very important.”

The couple wanted their dog to be able to handle frequent transfers between their two homes, behave well during meals at restaurants and stay calm when they entertain strangers. Through the word of mouth, they found their answer in 28-year-old trainer Michael Hill.

Hill is one of a new breed of dog whisperers specializing in helping a discreet, élite cabal of wealthy Americans, who rely on them for everything dog-related. Whether training a pup to stay calm on a private plane (which makes it easier to keep those cream carpets spotless) or helping older dogs weather the incursions onto their turf that summertime galas will bring, Hill and his ilk cater to a very specific set of four-legged needs.

Hill and Francesca doing a leash exercise to prepare for a shopping day.

When it came to Francesca, for instance, Smith and Leone’s love of entertaining at home was central to her training. “We have a lot of formal lunches by the pool, and you’ve got to have a dog that isn’t annoying anyone,”
Smith says. “Michael teaches dogs to fit into the lifestyle of the owner. That’s what we liked about him.”

To keep Francesca from nipping at the heels of well-heeled guests, Hill advised the couple to keep their pampered pooch upstairs until all the guests arrived. “Then the smart time to introduce her to the party was later, on a leash,” Hill explains. “Then you have an exit strategy, with a care provider on standby to take her away when she’s ready not to be part of the event anymore.”

She even underwent restaurant training during a field trip with Hill and the couple for a quick al fresco lunch to help acclimatize her. “Another couple came in, and looked over,” Leone says, “and without missing a beat, Michael said ‘We’re still training this dog—do you mind sitting at another table?'” 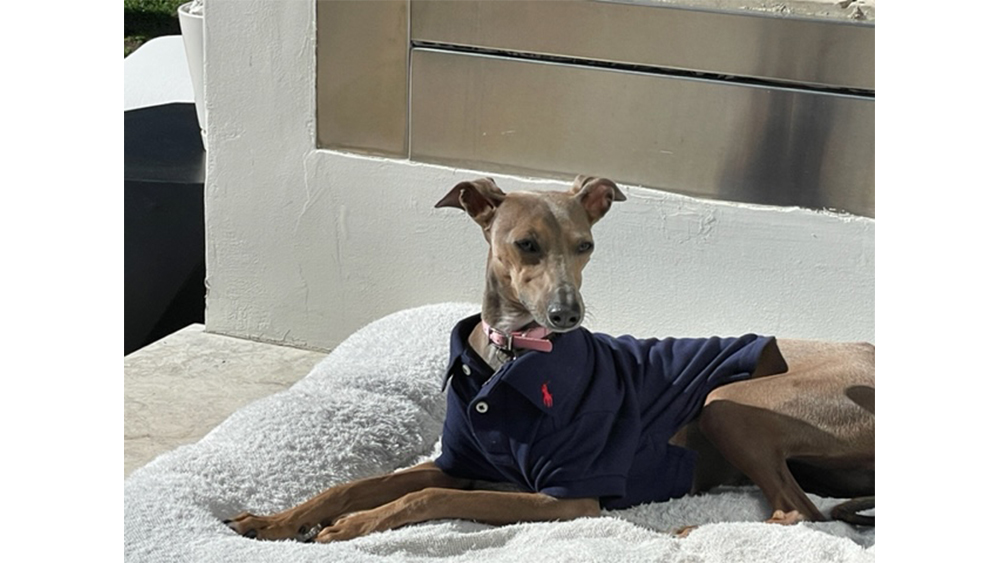 Francesca the Italian greyhound, one of Michael Hill’s well-trained dogs.

Often, clients brief Hill from the outset—in other words, they hire him to find, and then train, the dogs coming into their homes. “I call myself a matchmaker, and I look at the ramifications of this kind of lifestyle—living in LA, New York and Paris, for example,” Hill says. For his wealthiest customers, he often recommends sporting or hunting dogs, breeds genetically predisposed to look for cues from their owners. Take the English Pointer he just placed with one couple. “They love Golden Retrievers, but one partner is an artist, and it didn’t fit for them artistically—the style and look—so I surprised them with that,” Hill says.

Tougher for jet set lifestyles, he cautions, are terriers (“They’re pure instinct, with no input from their person – if it’s furry and moves, they’ll chase it and kill it”) and Bulldogs, with their inbred stubbornness and common breathing problems, which make flying trickier. “Frenchies can’t even be shipped cargo, and you have to teach them how to handle stress,” Hill says. Some smaller dogs can be anti-social, and less comfortable with homes where entertaining is part of everyday life. “Chihuahuas are emotionally monogamous, and their whole world revolves around their one person; they can hardly tolerate other people,” he laughs.

Hill will board clients’ dogs if they’re on extended trips. He’s even begun dog-sitting for clients at big events. One customer, who was getting married in Napa, flew Hill in to mind their dog during the weekend. The wedding planner recommended his services, which has led to a regular sideline at such events. “A crowd of strangers, flashing lights, lots of different homes—they need to stay calm,” he explains. 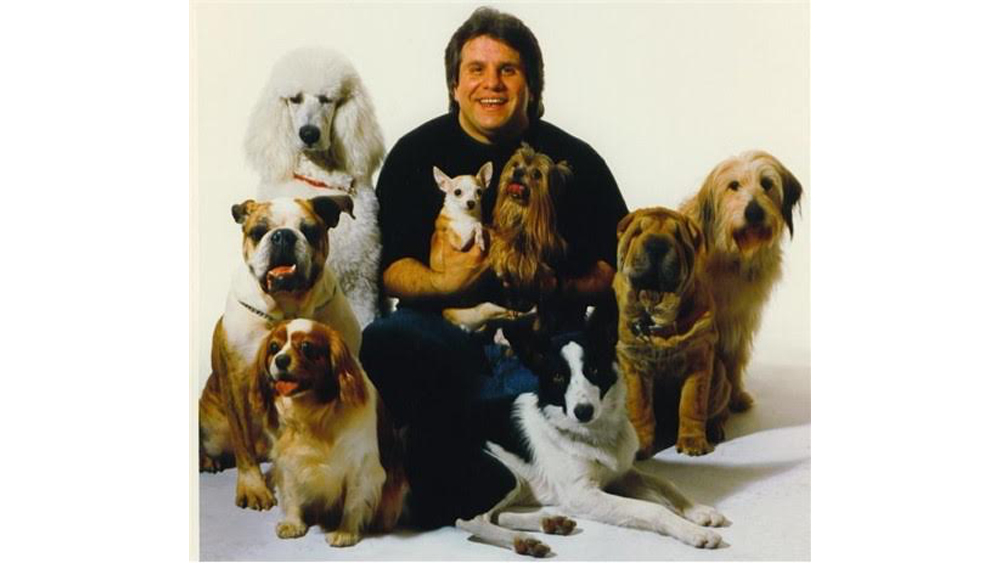 Dog trainer Bash Dibra is one of the growing breed of trainers who cater to elite humans and the dogs who love them.

That was Karen Silverman’s problem. She lives in the Hamptons, in an oceanfront estate in Wainscott, a fully staffed house where she often entertains. That was a challenge for her Yorkie, Princess Isadora (call her Izzy). “The gardener would come to water the plants, and she would attack him right away, through his pants and boots. Whenever people were here working, she would bark,” Silverman recalls. That’s when she turned to Bash Dibra, a New York-based dog trainer who, like Hill, also has a blue chip client base.

Dibra suggested Silverman grab a pot and bang it, hard, with a wooden spoon whenever the dog’s barking was out of control; it’s been so effective at tamping down her excitability, she says, that Izzy now stops yapping the moment she sees Silverman reach for a pot. Dibra also worked with Silverman’s daughter, who’s often on a plane with her Frenchie; the pooch had resisted all attempts to be coaxed into a travel bag. “By the end of that session, the dog was walking right into it and laying down on command,” Silverman says, still slightly stunned.

Dibra’s approach to entertaining is novel: he says to think of your dog as a co-host at any party you throw—it helps calm them mentally and make them less anxious about encroachments on their territory. The biggest problems at most bashes, says Bash, aren’t the animals; Rather, it’s the tipsy humans, who’ll often sneak hors’oeuvres to dogs even when asked not to feed. “One of my clients got so frustrated at this happening and asked me what to do, so I said to tell guests that the dog has tummy problems, and if you give him the wrong food, there will be diarrhea all over the place,” he says.

Dibra also reads animals for seasonal changes, whether it’s skiing in Aspen or heading out East to live by the beach for the summer. “It’s like a tune-up, to make sure they’re better behaved—we might go for walks up and down by the ocean, so they don’t smell the salt water and lose their sense of where their people are,” he explains. Pool prep is vital, too. “It’s a symphony of craziness when everyone dives into the pool, and you have to teach the dogs how to get out, and how to swim—every dog ​​must have a rudder or a tail to swim.” After one client’s Basset Hound drowned in her pool, Dibra was tasked with training its replacement to avoid the water under any circumstances. 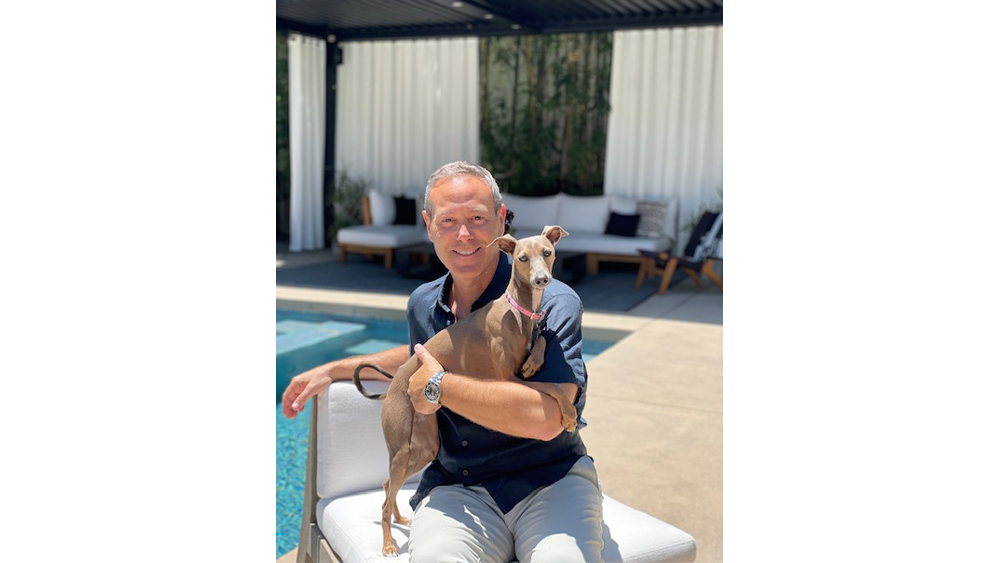 Frank Smith with his dog Francesca

Sonny Kilfoyle has worked on similar challenges. The Hamptons-based trainer and breeder runs Saltaire Gun Dogs with his wife Danielle. “Not all dogs should be swimming—I wouldn’t put a bulldog in, as their legs are too short and their bodies too heavy,” he warns. He also likes to train dogs in the ocean, the better to cope with riptides and undertows. “I remember one time I was taking an older dog out in Peconic Bay, who happened to be deaf, and I threw a ball out about 75 yards, and he went out to it,” Kilfoyle says, “The current would sweep him away and I had to jump into the water and bring him out, because he couldn’t hear mys.”

Kilfoyle also notes that the end of the summer is a crucial time for pets who’ve spent months in resort areas, whether Martha’s Vineyard or Mackinac Island. “A dog gets accustomed to running free, and has a careless mindset about it, then has to go back to the city—it can have serious repercussions,” he says. “You have to take training seriously if you’re trying to and from places like that. Fortunately, one percent types tend to be very bright people, and competitive by nature. They want to do a good job at everything, including training.”

That’s certainly true of Smith, who owns Francesca. He recalls one incident proudly, citing it as the ultimate evidence of Hill’s impact. He, Leone and their dog were sitting on the beach at a five-star hotel in Santa Barbara; Francesca lay quietly on Smith’s lap as he sipped a martini. “The next day, we were walking through the hotel—we didn’t have her with us—and a woman stopped us and said ‘Do you have an Italian grayhound? That’s what I wanted my whole life: a dog to sit on my lap while I’m having a martini. Who’s your trainer?”