The Internet can offer a wealth of tips and facts on dog food. Unfortunately, it provides even more dog food myths and misinformation. Here’s a sampling of dog-feeding urban legends populating the Web and the actual truths behind them.

My initial reaction to this was “hogwash!” But then I started to wonder why so few commercial foods contained pork. A perusal of the Internet found several sites warning me off the killer pig, including the thought that pork’s high fat content will cause pancreatitis in dogs (yet pork contains a little over one-third the fat content of beef), that it contains something toxic to dogs’ livers (a mystery component), that pigs eat disgusting things including bugs (but it’s OK for people to eat them), and that pig meat is hard to come by (harder than bison?).

I found that a few dog food companies do offer pork-based foods. Its scarcity may simply be because so many parts of a pig are used for human consumption, so snouts and feet and such don’t make it to the dog food plant. And because of the possibility of trichinosis in uncooked pork, nobody is going to suggest it as a great raw-food ingredient.

Still, I needed a more authoritative source than my own musings, so I contacted one of the companies that offer a pork-based food. I spoke to Eagle Pack staff veterinarian Al Townshend, DVM, to get the skinny on pork. “Pork is a highly digestible animal protein, an excellent source of amino acids, and a unique protein source that not all pets are typically exposed to,” he told me. “It’s less likely to cause an allergic reaction that some pets may have to other proteins. We recommend pork as a protein because it contains more calories per pound.” Besides, it’s the other white meat.

There is nothing inherently less allergenic in one meat compared to another. Lamb was initially used in hypoallergenic dog foods because it was a meat most dogs had not eaten before, and therefore were unlikely to have developed food allergies to. Now, with so many people feeding lamb as a regular diet, manufacturers have had to find more exotic meat sources such as duck or bison.

The idea that excess protein causes kidney failure arises from the fact that high levels of protein have historically been ill-advised for dogs with kidney failure. Failing kidneys allow urea, a byproduct of protein metabolism, to build up in the blood, making the dog feel sick. That’s why the blood urea nitrogen (BUN) is used as one index of kidney function. Decreasing dietary protein can decrease the BUN. But if the protein level is too low, the body simply draws on its own protein source, its muscles, causing more harm.

In fact, there’s a huge debate about whether restricted protein is the way to go for dogs with kidney disease, with studies disagreeing about whether it helps kidney patients live longer. Researchers do agree that protein sources with high biological value produce fewer waste products and are better choices. Egg protein has the highest biological value, followed by milk, meats, soybean, and grains.

But what about protein levels for dogs with normal kidney function? The idea got out that you could preserve kidney health by not taxing them with too much protein. There’s very little support for this precaution, however. We can start by looking at situations in humans where people eat a high-protein diet. Bodybuilders, for example, have a very high-protein diet but a recent study showed they have no protein-related kidney problems.

Even historically, members of the Lewis and Clark expedition reportedly ate a diet of mostly buffalo meat each day with no ill effects. More than 1,600 women followed for 11 years had no significant differences in glomerular filtration rate (GFR), a measure of kidney function, related to protein intake. In rats receiving a diet of 50 percent protein, no anatomical changes were noted in the kidneys compared to rats on a 14 percent protein diet.

There’s still disagreement about the ideal level of protein, but the bottom line is, feed a moderate level of high-quality protein, and your dog will likely be just fine.

Dog food myth No. 4: “Meat is more nutritious than a meat meal.”

If you’re comparing ingredient lists, should you choose the one with meat or with meat meal listed first? If your goal is to have the most meat nutrients, choose a meat meal. Ingredients appear in descending order of their weight; that weight includes any water in the ingredient. When you see chicken listed as an ingredient, it means unprocessed chicken, complete with water. Chicken meal means chicken with the water and fat removed. It weighs less than chicken but actually can contain a higher percentage of protein. 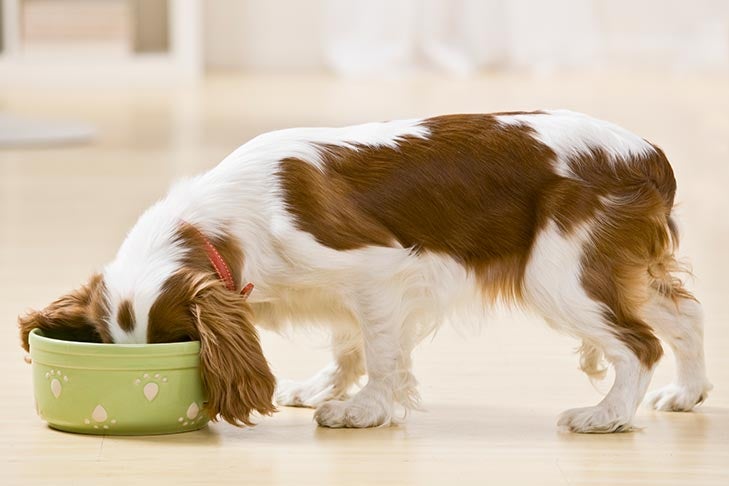 Dog food myth No. 5: “Grain, especially soy or corn, is bad for dogs.”

Some people blame grains for allergies, and it’s true some dogs can be allergic to some grains, just as some dogs can be allergic to some meats. But for most dogs, grain is fine, and usually contains more nutrients than replacement ingredients used in grain-free diets. Also be aware that the FDA is investigating potential links between grain-free diets and heart disease in dogs.

I’ve heard this since I was a little kid. And I have never found one study showing it to be true. The idea is not without merit; eggs contain lots of protein, fat, and vitamins, all essential to hair growth and skin health. One of those vitamins is biotin, which is important for cell growth and fatty-acid metabolism. Biotin is widely accepted to be helpful for human hair, though that may be simply because deficiencies can cause hair loss. While egg whites contain avidin, a biotin inhibitor, the yolks contain enough biotin to make up for it. But diets high in fat have been shown to result in glossier and softer coats in dogs, and might do the coat more good than eggs would.

As for feeding them raw, it’s true that cooking will do away with the avidin, but some people feel it also destroys vitamins. And of course, the raw egg/salmonella debate rages, with most food authorities cautioning against feeding raw eggs and many dog ​​naturalists advocating it, pointing out that the coyote that raised the chicken coop didn’t bother to cook them. And, I assume, had a shiny coat.

The bottom line is an egg is a good source of protein and other nutrients, but probably no better than any good diet at promoting a shiny coat.

While the Internet can be a great source of information, remember to use always look for trustworthy sources and seek scientific research backing up any claims your social media friends may be making before hitting that share button.