Generous TikTok users, beware – the celebrity you’re watching live on the app and tipping via gifts may not be who you think they are.

Around 1 am ET on July 6, it seemed like Billie Eilish went live on TikTok and chatted with her night-owl fans. Everything looked like you would expect a celebrity live to look: a flood of incoming comments, Billie nonchalantly answering questions, and an endless stream of gifts via TikTok’s in-app tipping system.

An eagle-eyed viewer quickly noticed that this Live had been aired before.
Credit: screenshot: twitter with permission

But if you looked a little closer, you’d find a couple of inconsistencies. The account “Billie” was live streaming from was not her official, verified TikTok account, but rather one suspiciously named @billieeilishlive_1, which has since been deleted. And though she was answering questions and interacting with fans, none of the comments she addressed seemed to appear in the comments section at the bottom of the Live. 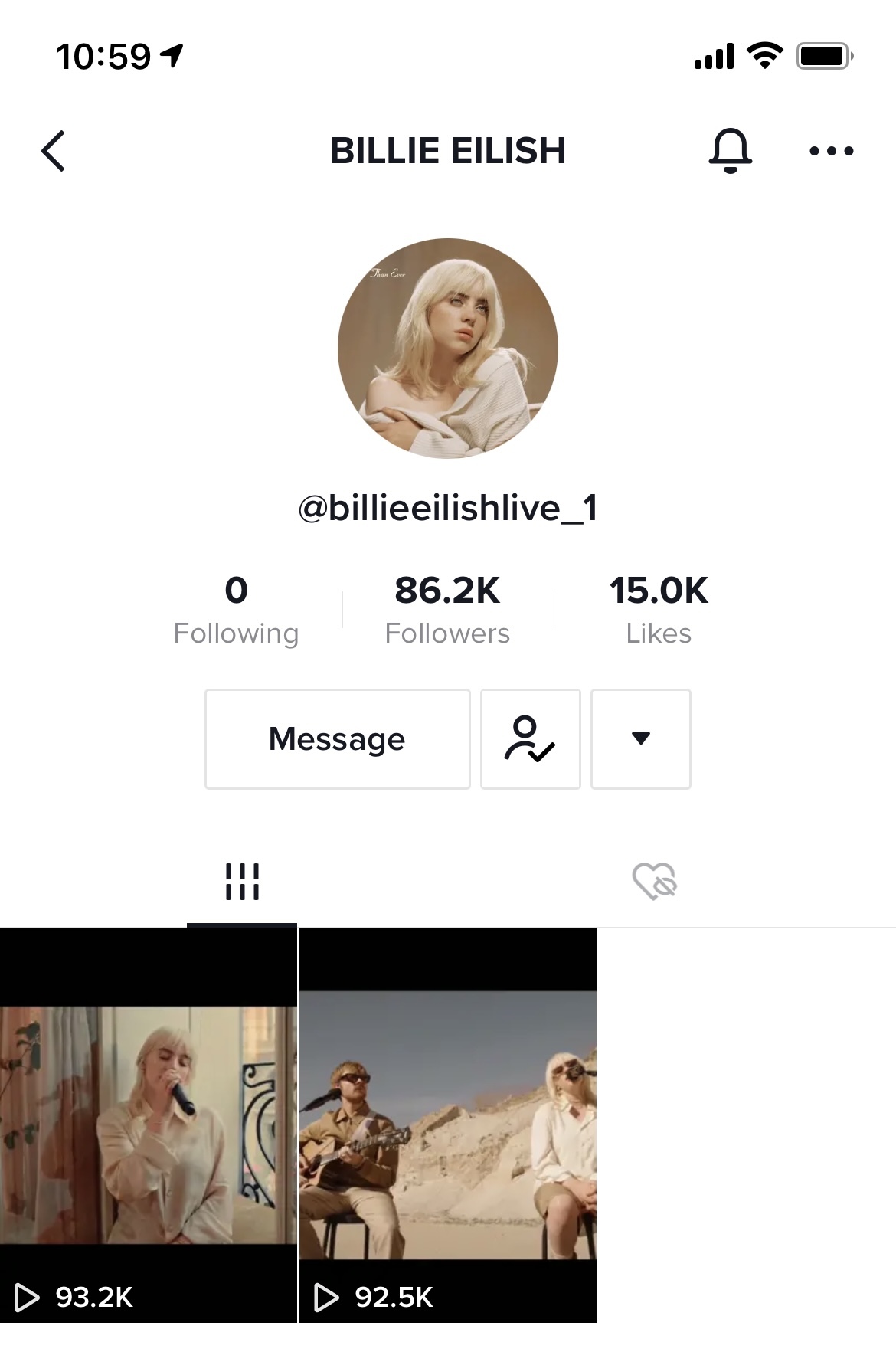 If you stuck around until the end, when Billie said farewell and the Live seemed to conclude, you would have also seen the entire live stream start over, indicating that the Live was pre-recorded. In this case, the video was most likely a recording of a previous Instagram Live that Billie actually conducted, replayed on TikTok to pass off as real and cash in on TikTok gifts.

This isn’t the first time that this has happened. According to Snopes, another Instagram Live originally hosted by Billie Eilish was broadcasted on TikTok Live on June 24 from the account @billielivehere, passing off as the real celebrity. At one point, this live attracted more than 43,000 viewers at around 3 am ET.

While TikTok does have limitations on who can participate in Lives and exchange gifts, it’s not very difficult to qualify. For a user to go live, they must be at least 16 years old and the account must have at least 1,000 followers. To send gifts while watching Lives, you must be at least 18 years old, a policy that TikTok changed from 13 years old after facing children’s privacy concerns.

The accounts that recirculated Billie Eilish’s Lives have easily surpassed the follower requirement, with more than 60,000 followers each. And as anyone knows, it’s not hard to enter a fake birthdate when creating the account to fit the requirements.

“Our community expects an authentic and entertaining experience, and we work hard to maintain that by identifying and removing behavior that violates our Community Guidelines,” a TikTok told spokesperson Mashable, “We continue to invest in strengthening our detection and prevention mechanisms to minimize the potential for this behavior to flourish on our platform.”

In terms of how much real money may have been scammed by the fake celebrity, TikTok’s gift currency is a little convoluted. To buy gifts, users must first buy coins, which can be found in the user’s profile settings under “Balance.” You can buy anywhere from 65 coins to 6,607 coins, ranging in price from $0.99 to $99.99. Gifts are then available for purchase on Lives, which range in price from 1 coin to 6,000 coins. The user who is hosting the Live will then receive an unknown amount of diamonds per gift, which can then be converted into real money.

Faux Billie Eilish is also not the only celebrity some TikTok users have been duped by, and the fake live phenomenon may be spreading to platforms like Facebook, too.

“There are a lot of these on Facebook,” tweeted Gabrielle DeFlorio. “I’ve seen Snoop Dogg and a ton of others.”

User Sophia Hernandez also said that there were “literally hundreds of these fake livestreams on TikTok,” and that they’ve been showing up on the app for months.

While the onus of removing fake celebrity Lives should be on TikTok itself, users can take several steps to make sure they’re not sending monetary rewards to impersonators.

Whether it’s fake Billie Eilish or phoney Snoop Dogg, no one wants to feel swindled out of their money by their favorite celebrity. If you really want to keep your gift currency secure, maybe don’t send them to celebrities at all – they don’t exactly need the extra cash.